To hear Allen Opall talk about his service on the Marathon County Board of Supervisors, it doesn’t take long to veer back to the issues that matter most to the district he represents.

Opall is the County Supervisor for District 37 that covers Wards 1, 2, 7, 8, and 9 in the Town of Rib Mountain, and he’s held the spot since 2014. He’s also served as Chair of the Town Board since 2003, following a 4-year stint as Supervisor in the mid-1990s — and served as Chair during a time when development in the Rib Mountain area exploded with national chains and locally owned businesses.

Along with economic development, two other issues that dominated Rib Mountain’s recent past are (a) Marathon County’s Uniform Addressing project and (b) discussions whether the Town might incorporate to become the Village of Rib Mountain. It’s the former that spurred Opall to run for the Marathon County Board, and he said that knowing Rib Mountain inside and out gives him a good perspective on the recent incorporation discussions that involve the County. (He added that the Town is currently “just looking at the pros and cons” of incorporation.)

Outside of his dedication to public service, you’ll most likely find Opall… well, outside. He’s been an avid outdoorsman most of his life, and he worked that interest into a couple of different career paths — first as a teacher and then as Park Manager for the Wausau and Marathon County Parks, Recreation & Forestry Department.

As environmental consciousness started to blossom in the late 1960s and early 1970s, Opall said he thought that would lead to a need for more conservation teachers around the country, which in turn led him to obtain a degree in Conservation Education. That followed a degree in Water Resource Management from the University of Wisconsin–Stevens Point.

Opall and his wife Kathryn moved to Rib Mountain in 1969, when she got a job teaching. His teaching career didn’t quite go as planned, as the need for conservation educators didn’t really pan out as anticipated. Opall did, however, spend 10 years as a substitute teacher until the Parks Department job came along.

During his 20-plus years at the department, Opall was Park Manager for one of the City of Wausau’s gems — Marathon Park — as well as a couple of other parks. He helped oversee bigger developments in Marathon Park, including the addition of multipurpose buildings and ice rinks, revisions to the camping area, and much more. Opall also said one of the perks of the Marathon Park job was meeting new people not just from across Wisconsin, but from all across the country who came to the park for events or who were just passing through and stayed at the campground.

It was the development of the county’s Uniform Addressing project that sparked Opall’s interest in the County Board in the first place, though he said his interest in government dates back to junior high school Civics classes. The re-addressing project, which included almost all of Marathon County, changed 20,000+ address numbers — and, in some places, street names, too — to make each address unique and eliminate the possibility of confusion for emergency responders, if for example, there was a Bluebell Drive, Bluebell Lane, and Bluebell Road all in the same town. 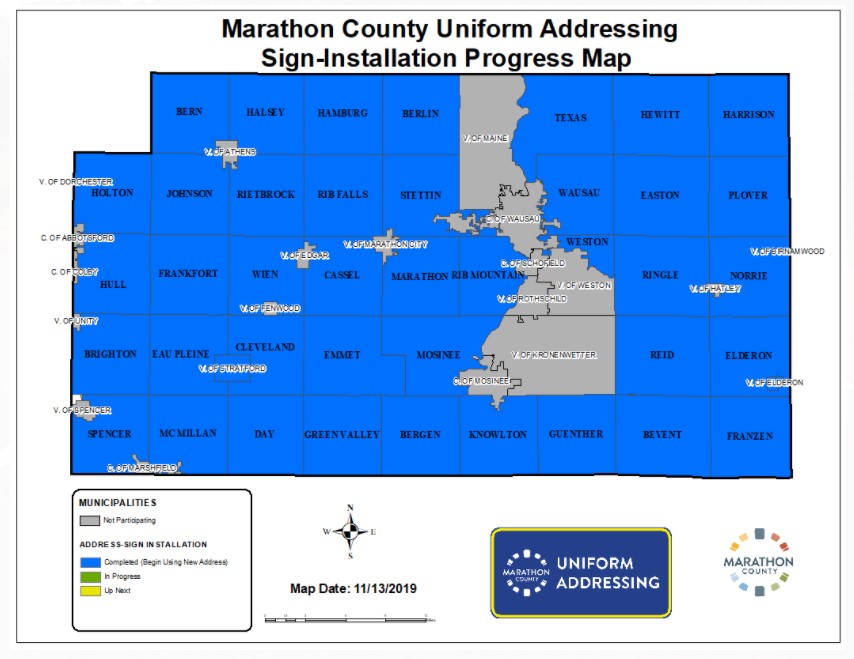 Opall felt at the time of the Uniform Addressing project that the Town of Rib Mountain wasn’t getting enough information — not to mention he was busy listening to the opposition from what he termed the “vast majority” of Town residents. Rib Mountain challenged its inclusion in the project in court, and eventually the Wisconsin Supreme Court ruled in 2019 that the Town must be included in the County-wide project. Said Opall:

“We were just following the wishes of the residents, and took it as far as we could.”

“What is the next thing the County will do to us as a Town? What about the next shoe — if there is another shoe, and I’m not saying there is. But that’s been brought up by [Town] supervisors and some residents.”

Incorporating into a Village would not only give Rib Mountain more independence from the County, but it also would create a stronger border with the City of Wausau, as towns can be annexed by cities, villages cannot.

Serving on 2 municipal boards keeps Opall plenty busy, but he does make time to spend at his cabin on Wisconsin’s South Twin Lake, north of Eagle River, which he purchased in the early 1990s. There, he indulges in a lifetime passion of fishing, mainly for musky and walleye. Until the early 2000s, Opall was also a competitive skeet shooter, though the southpaw had to give that up when he had a pacemaker put in, since pacemakers and kickback from guns don’t mix.

Opall even tried to make his love of the outdoors a full-time gig as a licensed guide in the 1970s. But the time away from his new, young bride and the fact that it wasn’t too lucrative put an end to that career pretty quick, he joked:

“All the money I made I’d have to spend at a fancy restaurant to make it up to my wife.”

Opall’s wife has since passed away. He stays in close touch with his 2 children, Brent and Kim, who are now the fourth generation of the Opall family to become teachers.

Like other supervisors who’ve spoken to Wisconsin Central Time News, Opall laments a decline in civility not just at the County Government level, but also across the state and nation, which sometimes makes his 2 jobs as Rib Mountain Chairman and Marathon County Board Supervisor a challenge.

But one thing that surely hasn’t changed over the years is Opall’s dedication to serving Rib Mountain — whether it’s a Town or a Village.

Chad Dally is a library specialist with the Marathon County Public Library, where he’s worked since 2012. He splits his time at the library between reference and programming, and generally prefers to read nonfiction over fiction.  Email Chad Dally