Marathon County has more than 6,000 Hmong residents. By now, pretty much everyone in Marathon County has had some interaction with a Hmong person — either at work, church, clubs, events, as a neighbor, and so on. But what some people may fail to recognize is that the people they are interacting with are often leaders in the Hmong community and they are very much bi–cultural.

So, here’s YOUR chance to learn a bit more about the Hmong culture in return!

Below Dr. Maysee Yang Herr and I answer 5 questions to help give you a tiny “crash course” in Hmong traditions, families, food, history, and language.

1. What are some common Hmong foods, and how can I try them?

Here are some Hmong staples:

You could try many of these ethnic culinary delights at events such as: 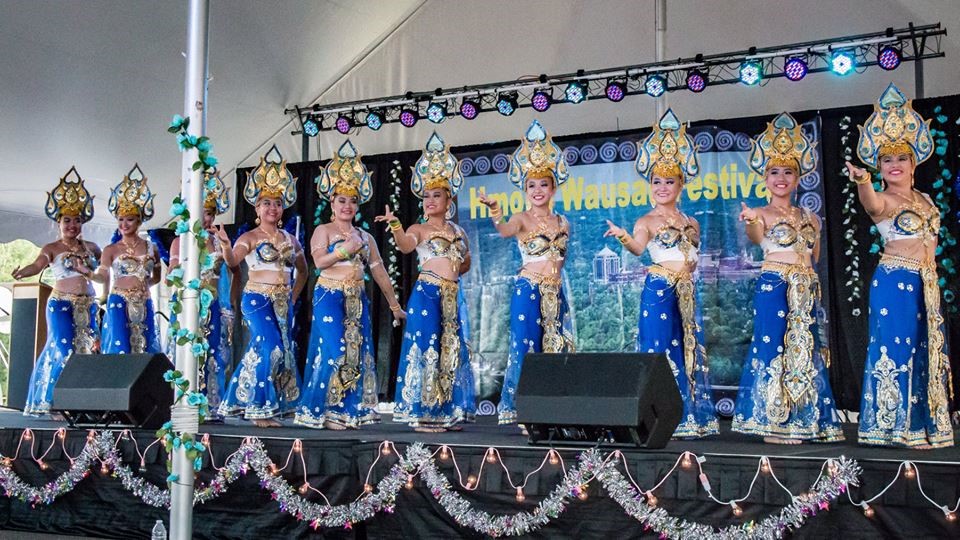 Or, you could frequent these Marathon County businesses:

An authentic Hmong food that you won’t find in restaurants but that is a staple food in many Hmong homes with elders is Boiled Vegetables with no additional seasonings added. The vegetable broth from this dish is used as a drink during a meal and often replaces a need for any other beverage. Some younger family members enjoy this as well.

Did you know that Nyob Zoo Milwaukee TV is Wisconsin’s first Hmong news TV? It does a cooking segment that you might want to watch for some recipe ideas. You can watch previous shows on YouTube.

If you’re really adventurous, you might want to contact the Marathon County Public Library to check out a Hmong cookbook like Cooking from the Heart: The Hmong Kitchen in America, by Sami Scripter and Sheng Yang.

2. What is a Hmong clan? Does a woman change clans when she gets married?

There are 18 Hmong clans, or surnames:

These clans are often used as the family’s last name, but they actually have much more significance than one might realize . . .

All those with the same clan name are perceived to be as close as relatives, even though they may not be able to trace how their families are related. Those of the same clan often help one another during festivities and times of need.

Traditionally, it’s taboo to marry someone of the same clan name. When a woman marries into a man’s family, her primary allegiance traditionally shifts to her husband’s family and she will often identify herself as a part of her husband’s clan. However, this does not mean that she has to change her legal clan name on paper. In many cases, her name on paper will still be her maiden name.

3. Why do Hmong words look so different from how they sound when spelled out? For example, nyob zoo (hello) looks nothing like how it’s pronounced: ‘nah zhong.’

Many scholars believe the original Hmong alphabet was written in characters similar to Chinese or Japanese characters but was lost during the suppression of the Hmong in China thousands of years ago. After this period, Hmong people passed down their history orally or through story cloths (mostly created in paj ntaub) in Laos and Thailand.

I invite you to take just a few minutes to learn more about Hmong story cloths, like the one shown below, which appears in this 4-minute video put out by Kiwanis International in which Hmong leader Lo Lee weaves the story of the Hmong people before and after the Vietnam War. It’s truly fascinating. You’ll be glad you decided to watch this great video to learn how Hmong story cloths are used to record history.

Hmong spoken language makes use of 8 distinct tones. A word may be spelled one way, but if it’s pronounced with a different tone, it may have a completely different meaning.

Today, most Hmong people write their language using the Romanized Popular Alphabet (RPA), a version of the Latin alphabet developed by American missionary linguists in the 1950s in Laos. In RPA, an unpronounced final marker (letter) signals which tone to use.

Here are some common words and phrases using RPA:

Something interesting to think about when reading Hmong words is that rarely do Hmong words end with a closed mouth.

4. What is a tradition I should know with regard to Hmong weddings and funerals?

A large portion of a Hmong wedding takes place in the home of the bride. Each side of the family has a negotiator, or what is known in Hmong as “mej koob,” who represents their family at the ceremony table. Much of the ceremony focuses on the coming together of not only two individuals, but also two families. Like many cultures, there’s a great deal of food and drinks to be had as a way to celebrate the momentous occasion. Hmong brides don’t traditionally wear white during Hmong weddings. If that does happen, it’s the influence of western weddings. Also, nowadays, traditional Hmong clothing does not have to be worn throughout the ceremony. It’s usually only put on toward the end of the ceremony when the couple leaves the bride’s parents’ home.

Traditionally, Hmong funerals lasted for several days due to the amount of time it took for families from far distances to arrive to the funeral by foot or, on rare occasions, by horse. Almost no one had access to a car. By having a longer funeral, some families believe that they are displaying the extent of their wealth, love, and respect for their deceased loved ones.

Due to the traditional U.S. workweek and other common obligations of Americans, Hmong funerals have been shortened to three days (a long weekend) or even shorter than that nowadays.

One ritual at funerals is to help the spirit of the deceased retrace the places they have lived and ultimately travel back to their birth location and to their final spiritual resting place. Those who practice these Hmong traditions believe that this travel led by a shaman must be taken in order for the spirit to find peace in the next life. It’s also this belief in a next life that makes the idea of cremation taboo in the eyes of many Hmong people.

The original home of the Hmong is thought to have been the Huang He (Yellow River) basin of central China. They were slowly driven southward and marginalized by the expanding population of the Han Chinese.

Traditionally, the Hmong practiced the shifting cultivation of unirrigated upland crops: buckwheat, barley, and millet, grown at the highest altitudes, and rice and corn (maize), grown at lower elevations. Virgin forest was cleared and burnt off for the planting of new fields. When soil fertility declined (usually after several decades), the entire village would relocate, often a considerable distance away.

In the late 19th century, the opium poppy was introduced into the highlands by outside traders, and the Hmong began to cultivate it in an integrated cycle together with corn and dry rice. They sold opium to itinerant traders, usually Chinese, in return for silver.

By the late 20th century, shifting cultivation had become impracticable except in a few remote areas. In response to government programs in Laos, the Hmong had largely abandoned shifting cultivation and opium production. They instead switched to permanent field cultivation of crops like corn, vegetables, flowers, and fruits, which they sold in the lowland markets in Laos.

Under General Vang Pao, Hmong people sided with the Americans in the Vietnam War. After the Americans left Southeast Asia and the South Vietnamese government collapsed, more than 100,000 Hmong fled to Laos into refugee camps in Thailand (as you learned if you watched the 4-minute Kiwanis story cloth video above).

And, well, most of you know the rest of their story of coming to America after that . . .

If you’re interested in learning more about the experience of Hmong people transitioning to the Midwest, I recommend reading The Late Homecomer: A Hmong Family Memoir, available at your local bookstore. (Listen to an audio sample here, or the eBook and book on CD are available from the Marathon County Public Library.)

I had the chance to meet the author, Kao Kalia Yang, at one of the Hmong events in Wausau about 15 years ago. Our County Leadership Book Club read her book and discussed it with her over the phone. We all agreed that we learned some important and poignant facts about the Hmong, but more importantly we learned about the courage and heart of our Hmong residents here in Marathon County.

To conclude, I’d like to offer my thanks to Dr. Maysee Yang Herr for her contributions to and careful review of this eNewsletter article. Maysee is a former Wausau resident who recently published her first English-Hmong bilingual children’s book: The Things I Like / Tej Yaam (Yam) Kuv Nyam (Nyiam). This book is the first of several in a book series for beginner Hmong readers. Her books are intended not only for children but for anyone who wishes to learn more about how to speak and read Hmong.

I invite you to learn more about Maysee’s new book in her pre-release video. It’s her hope that English and Hmong speakers alike will enjoy learning more about the Hmong language. The book features both the green and white dialect and contains a pronunciation guide, several common Hmong phrases, and fun facts as well.

And be sure to attend the upcoming Wausau Area Hmong New Year Celebration on November 3 & 4, 2018, at the Greenheck Fieldhouse in Schofield. There will be food, music, vendors, a ball toss (pov pob), and fun for all. The public is welcome at this local cultural event all about “Converging Communities and Embracing Diversity.”

I’ll leave you with some video footage of me performing a Hmong cultural dance with Sasor Lee at the 2016 “DREAM BIG: 2056” scholarship fundraiser “dance-off.”

In his Administrator role, Brad Karger leads an organization with 700+ employees and an annual budget of more than $162 million. Brad has been in leadership positions with Marathon County for the past 30 years. He is known statewide for generating innovative ideas and solutions to problems, openness and transparency, and a commitment to community service that extends well beyond the normal workday.  Email Brad Karger.

Dr. Maysee Yang Herr is a former associate professor of education at University of Wisconsin–Stevens Point. She moved to Kansas City, Kansas, in spring 2018 to be closer to her Herr family. Since her time at the university, Dr. Herr has provided and continues to provide equity consulting to organizations and businesses both in the non-profit and for-profit sectors. These days, she is spending more time with her family and working on completing more books in her first book series for beginner Hmong readers.  Email Dr. Maysee Yang Herr.