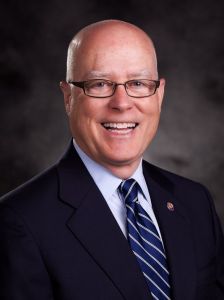 Earlier this month, Chancellor Bernie Patterson caused quite a stir with the release of his proposal for eliminating some degree programs at UWSP and adding others.

Now, I’m not an expert on higher education, but because the University of Wisconsin–Marathon County (UWMC) is poised to be restructured under UWSP, people in our community recently started to ask me to weigh in on matters like the Chancellor’s curriculum proposal.

I’m not intending to “sell” the Chancellor’s proposal, nor do I pretend to be competent to fully critique it. This is merely my 2¢ worth. Please take it for what it is…

Some examples of existing degree programs to be eliminated at UWSP include:

Some examples of new/expanded majors proposed at UWSP include:

I think I can see a pattern that the new majors have a clearer career pathway. 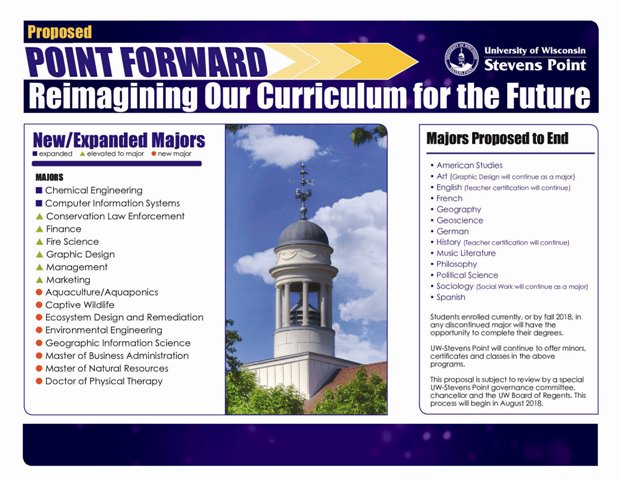 So, what’s all the fuss about, then?

Some of the people I talked with misunderstood the proposal; they thought that UWSP — and therefore our local 2-year UW campus after it restructures under UWSP — would no longer teach English, History, Political Science, or Philosophy, which are other degree programs proposed to end at UWSP, too (see graphic above).

But that’s not the case…

UWSP will still be a liberal arts institution and teach all of the subjects named. The proposed change is that students will no longer be able to major or graduate with a degree in those areas.

(If interested, you can read the Chancellor’s full proposal here: Point Forward: Reimaging Our Curriculum for the Future.)

The context of the Chancellor’s proposal is:

Given the context described above, I don’t know that it makes good financial sense to teach a 400-level Philosophy class to six students.

As I said, I’m a novice at college administration, but it seems to me that given the current situation, UWSP needs to shift away from less popular to more popular majors, as a class of 30 students  is a lot more likely to cover the cost of providing the class than is a class of six.

As a UWSP stakeholder, I’m not concerned that this is the beginning of the end of liberal arts education. I am, however, questioning if the university’s proposed academic program has broad application across a wide range of jobs.

I don’t want our local UW campus to become a “technical education” that sacrifices students learning to:

Chancellor Patterson and his team have assured me and the community that these critical life skills will be part of every program that is offered. In fact — this is his skills list. He agrees:

We need people educated for a CAREER, not just a JOB.  {Tweet this.}

I also want the degree programs to have a local market.

It’s great that UWSP Natural Resources graduates have positions all over the country, but I’m the Marathon County Administrator and I want UWSP degree programs to target jobs in Central Wisconsin because we need these highly skilled workers supporting our communities here.

As far as UWMC goes, my most important concerns are:

Neither of these concerns are impacted by the Chancellor’s proposal.

I encourage you to read the Executive Summary of the Chancellor’s proposal and give the matter some thought.

If you have ideas or want to give the Chancellor some feedback, UWSP has a website set up for that expressed purpose:  www.uwsp.edu/forkintheroad.

The changes being considered now at UWSP are important. Chancellor Patterson has expressed his willingness to listen to the opinions of stakeholders.

YOU are a stakeholder.

Why not take him up on his offer?

In his Administrator role, Brad Karger leads an organization with 700+ employees and an annual budget of more than $165 million. Brad has been in leadership positions with Marathon County for the past 30 years. He is known statewide for generating innovative ideas and solutions to problems, openness and transparency, and a commitment to community service that extends well beyond the normal workday.  Email Brad Karger.