John Robinson’s political career started at the playground on Wausau’s southeast side. (At least, that’s what my dad — Jim Rosenberg — contends when I asked him for insights into Robinson’s past.)

The Robinsons and the Rosenbergs go waaaaaaaay back to the 1950s…

The two families were part of the neighborhood made up of big families whose parents kicked them out in the morning and didn’t expect to see them again until the streetlights came on.

When I asked my dad when he knew that Robinson would be involved in politics, he told me this story:

I grew up a block away from John Robinson and his large family. When we wanted to have a football or baseball game in the neighborhood, we would go from door to door in our area to collect a team. Then, we would knock on the Robinsons’ door — with a half dozen boys, they already had a team!

What I remember from those games were not big plays, wins, or losses. It was that no matter what, John Robinson always knew the rules. Safeties, balks, infield flies, or forward progress — John was the man to make the call. He was better than a referee; he was a 10-year-old attorney out there. You could argue if you wanted to, but you couldn’t win. The guy must’ve slept with a rulebook.

That’s a quality he certainly took with him through City Council, the State Legislature, the Mayor’s Office, and the County Board — where parliamentary procedure can be either your friend or your enemy. But while John has always insisted that the game be played according to the rules, he also always applies a good-natured sense of humor… because just like all of those football and baseball games we played a half a century back, there’s always the next game to think about.

When I sat down with Robinson on a sunny September Friday to talk about his political tenure, he painted a strikingly similar picture of himself and his path. During our conversation, time and again, he highlighted three main points:

Robinson grew up in a politically active family. His great-grandfather was Wausau’s first police chief, and both of his great grandparents were active in county government. His dad also ran for City Council. And while social participation was important, Robinson and his family didn’t always see eye to eye:

“My parents were Goldwater Republicans in 64. So, I re-educated them. They’ve been really supportive over the years.”

Robinson was deeply involved in Young Democrats in high school on both the local and state level. He worked on several campaigns, including longtime Congressman Dave Obey’s campaign. When he graduated, he spent the summer and fall of 1973 working on George McGovern’s Senate campaign after McGovern lost the presidential race. It was during that time that Robinson decided he should throw his own hat into the ring:

“I went out and worked in South Dakota during the Watergate trials, and I came back really fired up and wanted to do something. That winter, I decided to run for the City Council and County Board.”

At the time, if you were elected to the Wausau City Council, you also served as part of the Marathon County Board.

Robinson was all in…

During that first stint in government, Robinson wanted to work on the county’s transportation policies, but at that time, you had to be elected to serve on the Highway Commission — so he ran. Four times:

“The first few meetings, I walked out of the meetings because the Highway Commissioner refused to post the agendas in compliance with the open meetings law. I said that I couldn’t participate in the meetings if they weren’t properly noticed. I was — and still am — a strong advocate for open government. I’d run from the meeting to the Clerk’s Office and say the meetings weren’t posted and, therefore, were illegal. Finally, we were able to convince Cal Cook to post the agendas.”

During his tenure in city government, Robinson sought to not only operate properly, but also to shine a light and actively seek public input:

“One of the things that I did back in ‘74 was we started the ward meetings, which you [County Board Supervisor Katie Rosenberg] and [Wausau City Council Alderperson] Pat [Peckham] have kept up on. We held those on a monthly basis to give people a chance to participate. It was really critical during the discussions on the mall. We brought in a lot of people, and they came from all over the city.”

Robinson carried that spirit with him to the Assembly, where he worked on issues such as helping to control the AIDS crisis in the ‘80s. When there was no rulebook, he sought to create some semblance of order:

“While I was in the legislature, I had the opportunity to chair the Health Committee, and we worked on a lot of different things, but one of the critical issues was AIDS and trying to strike a balance between individual rights and the rights of society. We wanted to encourage people who were at risk to seek treatment, while protecting their employment and health insurance status. We passed model legislation for the nation.”

When he came back to Wausau and served as Mayor, he started the first city newsletter, worked on the first comprehensive capital improvement plan, and demanded that elected officials take a lead in creating the budget:

“We [Robinson and the City Finance Director] got into an argument during the first budget because he thought we needed to raise taxes to keep pace with levy limits. I said no. We will run this city based upon what our needs are, and we had a 2% tax decrease. It kind of set the tone.” 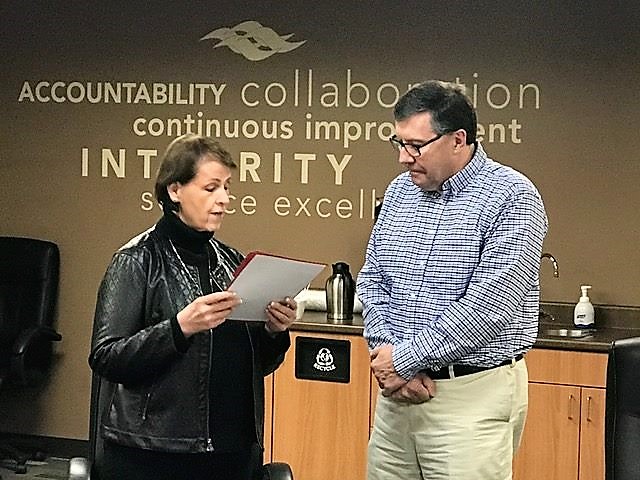 John Robinson was honored by the North Central Health Care Board for his 10 years of service.

Robinson isn’t a rules wonk just to be right; he uses it as a platform to get work done.

We all know what politics looks like when leaders become polarized. Robinson says the non-partisan County Board is a unique body, whose members can — and must — practice cooperation across a broad range of values and ideologies. Robinson says that keeping that collaborative spirit at the center of his public service has enabled him to accomplish the people’s work:

“One of my mottos has been, Remember the next vote. You get frustrated with people. There have been numerous times when you thought someone was going to vote one way and they voted the opposite way. You have to deal with them as people and understand that there are reasons to keep the dialogue there and be respectful of their opinion and look for where you have some common ground.”

Earlier this decade, Robinson worked with the Marathon County Board to make sure the Affordable Care Act worked for the county, not against it:

“While ACA was a federal issue, we were looking for ways to expand in the county enrollment to make sure that people who would qualify were enrolled. It not only benefitted the people who did enroll, it benefitted the employers and the other residents in the county because we avoided cost shifting. For instance, we avoided people without health insurance presenting themselves to the providers without insurance. You have to break issues down so you understand how they impact people.”

Robinson used his standing as Mayor to include new communities in the governing process:

Up until that point, foundations and churches were reaching out, but not government.

In the Assembly, Robinson worked to provide a stable source of funding for transportation:

“We worked on gas tax indexing. At that time, we were trying to complete four-lane status for Highways 51 and 29 and were able to do that through a guaranteed source of funding. Unfortunately, that has subsequently been repealed. We tried to pay for what we proposed, and back in those days, you had a better bipartisan environment. It’s difficult to be independent now. That’s a sad commentary on the process and, to a degree, some of the people in the process.”

Robinson has been an outspoken critic of the current polarization, not just between opposing political ideologies, but also the schism between government bodies:

“The biggest challenge right now is that we have an unresponsive state government in terms of understanding the role of local government. They talk about partnerships, but they continue to hamstring the efforts of local government to govern. They talk about us needing to hold the line on local property taxes, yet they limit our ability to pay for things through user fees. They don’t properly fund transportation. We can’t even enjoy the growth that we’ve had in equalized valuation. We need to do a better job communicating those concerns to the legislature.”

Robinson is set to retire this month from his position at the Wisconsin Department of Natural Resources.

While he’ll have more free time now than he’s ever had, he said he’s not looking to fill his time with another stint as Mayor or Assembly Representative:

“Been there, done that.”

He’s looking forward to spending more time with his family. And, well, who could blame him?

Katie Rosenberg is a Marathon County Board Supervisor representing District 1. She is passionate about engaging the community and is active on social media and in organizing neighborhood constituent meetings with her Wausau City Council counterpart, Alderperson Pat Peckham. In her free time, you can find Katie enjoying the outdoors with her husband on bike, on roller skates, and in trail shoes. She also enjoys attending all manner of political events, traveling the world, and cooking up a mean vegetarian soup.  Email Katie Rosenberg